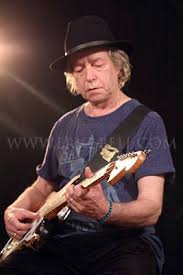 It is with great honour and excitement that we announce legendary founding guitarist of the Irish superband Thin Lizzy, Eric Bell and his band The Eric Bell Trio will be headlining the Gig for Gary 2019 at The Empire Belfast on April 12th.

The Eric Bell Trio is Eric’s powerhouse touring band of many years, featuring Romek Parol on drums and Dave Wintour on bass.

It is an honor to have Eric join us for the show.   Eric was a life-long friend of Gary Moore and is delighted to support the project.   In 2016 Eric released an original song titled “Song for Gary” which he will be singing on the night, along with some surprises including more amazing early Thin Lizzy tunes to mark Eric’s 50th anniversary since forming Thin Lizzy in Dublin.

A long time ago, Belfast guitarist Eric Bell visited Dublin and while he was there he went to see a local rock band called Orphanage play a show.  Eric was very impressed.  The lead singer was like no-one else, you could tell from his aura that he had very special qualities.  He had the voice, stage presence and charisma to become a mega-star, and the bonus was that he sometimes also played bass.  The drummer was solid as a rock and together their sound was like nothing else.  Eric chatted with the lads after the show and discovered they were keen to head over to London and make the big time, so they made a plan to join Eric and form a new band.  The musicians were Philip Lynott and Brian Downey.   Eric suggested the name Thin Lizzy and the rest is history.  The lads finished their remaining shows with Orphanage band, then moved to London with Eric on their new adventure, and together they created Irish rock history.

When you hear Eric Bell play those first fews notes, you just know you are in the presence of something special.  We can’t wait to hear him play on April 12th.

There will be a total of four bands playing on the night, stay tuned for more announcements!