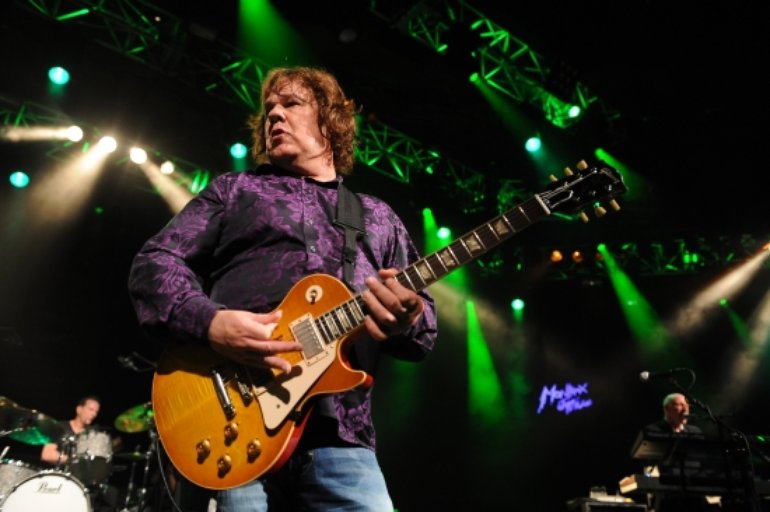 By Alex McGreevy. sonof71.com
The campaign to erect a statue of rock and blues guitar legend Gary more in his native Belfast, will take a step closer next Spring with two dedicated ‘Gig for Gary’ shows in Belfast and Dublin on the same weekend.
Moore, one of the most talented guitarists to emerge from Ireland, had a spectacular career with bands including Skid Row, Thin Lizzy, Colosseum II and G-Force and more, and predominately as a solo artist during which time he effortlessly switched from rock to heavy rock, and his celtic influences no doubt inspired an emerging genre of celtic metal, before getting back to the blues, taking his long-haired denim and leather- clad fans with him.
Born in Belfast, in the east of the Northern Ireland capital, Moore passed away in 2011 after suffering a heart attack in his sleep, aged 58.
The Wild Frontier Memorial Project, lead by a devoted collective of Gary’s early band friends from Dublin and Belfast, superfans and Gary’s youngest sister Patricia Moore, are hoping to meet with the Belfast City Council to discuss the plan for the statue.
Campaign co-founder Patricia, said: “We had great success with the Gig for Gary earlier this year and now with back- to-back shows in Dublin and Belfast, we will be taking another step on this journey to have Gary Moore honoured with a statue in Belfast.
“Fans raised almost £5,000 from one gig this year so we are aiming to double that next Spring. Before then, we aim to be having conversations with Belfast City Council. Several Belfast politicians are aware of our ambition and have shown an enthusiasm to see a statue of Gary in the city.
Dublin City rightfully honoured the great Phil Lynott, who was a close friend and co-artist of Gary’s, where his statue stands in Dublin so it makes perfect sense to honor Gary and his fans with a statue in Belfast. What an amazing pilgrimage it will be for Gary’s fans around the world to visit both cities to pay their respects.”
Moore’s guitar playing mastery was revered around the world and his talent saw him collaborate with stars like BB King and Albert King and, of course, the late Phil Lynott.
The dates, venues and a range of bands from Ireland and the UK will be announced at the end of this month.