Feb 6th – Remembering the Day Shockwaves were Sent Around the World

On the eve of February 6th, a certain Facebook page reads ..”When the sun goes down and a new day dawns … we will always remember – Lord of the Strings, Robert William Gary Moore. RIP we love you forever. Together we will all raise your statue. xxxxxxxxx” of course the Facebook page is none other than The Gary Moore Belfast Statue Project – Superfan Page, the page dedicated to the project launched in April 2019 and now in full swing to raise funds for a statue to honour virtuoso Irish guitar legend Gary Moore in his hometown of Belfast.

Gary is renowned for his impeccable international career which moved effortlessly through the genres of blues, rock to heavy metal and jazz-fusion and more for over four decades, Gary’s music has timeless appeal.

Known for his key role in bands such as the original Skid Row ( Dublin ) with Brush Shiels and Phil Lynott, and of course the Irish superband Thin Lizzy, Colosseum II, and of course his own Gary Moore band and more.   Gary also shared the stage with many blues and rock greats including B.B. King, Albert King, John Mayall, Jack Bruce, Ginger Baker, Albert Collins, George Harrison and Greg Lake, Gary’s music continues to inspire a growing legion of fans around the world.

Today, February 6th marks the 9th year since Gary’s sudden passing in tragic circumstances, with momentum gathering for the Belfast statue project, with some very well-known legends of rock lending a hand to create promotional videos on Youtube to help raise awareness of the statue project.  The first of the promo videos was launched recently on Youtube and features a heartwarming message from Doug Aldrick of the Dead Daisies in support of the statue project.  More great promotional Youtubes made by well known names of rock and will be launched over the coming weeks as tickets for the next Gig for Gary fundraising shows are being snapped up by eager fans who are flying in from around the world.

On May 8th and 9th the 2nd Gig for Gary fundraising show will be held in Belfast and Dublin, presented by the Irish Rock & Roll Museum, with these next two shows to guarantee the funds for stage 1 construction of the Belfast statue to commence.

Tickets on sale from Eventbrite, for more information see www.garymoorestatue.com and www.gigforgary.com 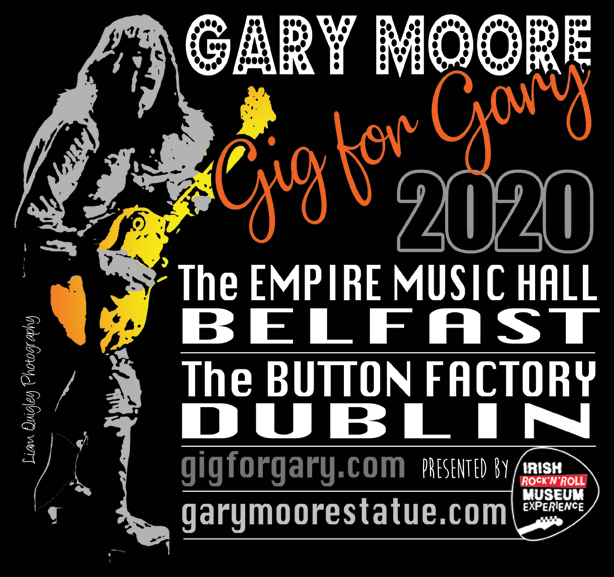